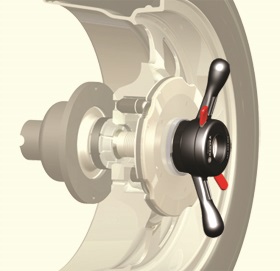 Incorrect use of Haweka Quick release wing nuts shortens the life of the product.
Correct use

Close
MEASURING THE PITCH OF A WHEEL BALANCER SHAFT 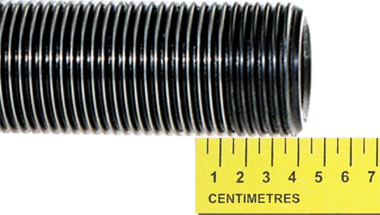 * count the troughs (lowest point) not the peaks of the thread.

A prior condition for the correct functioning of the quick release wing nut is a clean thread, both on the wing nut and on the actual threaded shaft. Dirt prevents the thread from engaging properly and the Wing Nut will not hold or lock. This may result in the wing nut coming loose when the machine is started!
Use dry lubricants only, never use oil! Wet lubricants help to create a paste which acts like a grinding paste.

Wheel balancers with very hard braking or starting action it is important to firmly tighten the wing nut.
Do not use a hammer.

• To undo the wing nut
IMPORTANT - FIRSTLY LOOSEN THE WING NUT BY TURNING IT BACK HALF A TURN AND THEN PULL THE LEVER TO ACTIVATE THE QUICK RELEASE MECHANISM.

Do not activate the quick release mechanism without backing off the wing nut as continual operation in this manner will result in premature wear of the wing nut, which will cause the wing nut to slip when it is tightened. 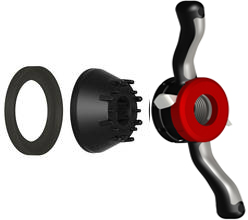